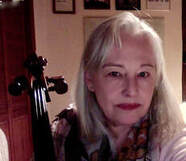 Cello Teacher Suzanne Smith founded cellochan in 1992 in Ann Arbor, MI.  Suzanne came to see the parallels between awareness training in Zen and what is needed when playing the cello.   Students need to be able to calm down, focus, and shift away from ultra competitiveness and self judgement.  CelloChanWoods, a retreat she created over 15 years ago, focuses on an open, focused approach that better serves the process of technical mastery and artistic clarity.  In 2016 she moved to Vermont from Ann Arbor, MI.


Ms. Smith has a Bachelor of Performance from Oberlin Conservatory and a Masters in Music from the University of New York at Stony Brook.  Her main teachers have been Richard ​Kapucinski at Oberlin, Bernard Greenhouse of the Beaux Arts Trio, and later over a 2 year period, Janos Starker in Bloomington, Indiana.  She has played in master classes at Tanglewood, The Cleveland Institute, Scotia Festival, The Sarasota Festival, and the New England Conservatory.  She has performed as soloist and chamber musician for over 30 years in many capacities.  Suzanne's ultimate goal for her students is to help them experience freedom at the instrument both technically and emotionally.  As expressed in the joyful statement of Jaqueline Du Pre at a young age about playing: "I feel like I'm flying!" Each student is different.  The challenge is to help a student access his/her musical voice, acquire the skills to present it, and gain confidence in doing so.  She performs with The Vermont Virtuosi, as Principal cellist of the Montpelier Chamber Orchestra, and teaches privately, offering chamber music coaching and private cello lessons.  She is on the faculty of the Middlebury Community Music Center and has a private studio in Moretown, VT.  In 2021 she created and conducts The Mad River Cello Orchestra as a way to help her students learn more directly from each other and to make music making more accessible.
on​
Suzanne Smith
449 Moretown Common Rd., Moretown, VT. 05660
cellochan3b@gmail.com ~ 802.496.5273
COPYRIGHT 2016